Showing posts with the label hip hop
Show all The idea of starting this show came from a conversation I had with one of my brothers. This was long before the internet was in our pockets and shaping our lives the way it does today. We made a plan to create a internet radio station called "GyeWeb Radio", that independent artist could use to promote their music. We wanted to provide a venue for the unheard artist to air and promote their skills. The ultimate goal was to help independent artist build a fan base outside of the main music industry and develop a revenue stream to support what they do. We felt that the industry was choking the life out of Hip-Hop, and we had a grand plan to save it. Unfortunately the cost at this time would have been in the 10's of thousands of dollars. With the financial crisis looming and by getting caught up in the "Great Real-Estate Hustle" we didn't have the money to finance the project. Fast forward about 10 years and now with the advancements in the internet and the dev
Post a Comment
Read more 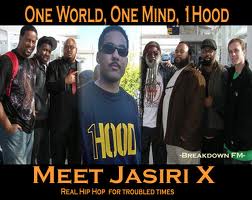 Now, I knew that my brothers  +jasiri X  and  +Paradise Gray  were in Pittsburgh NationBuilding, but to see the video shines a long needed light on the work that they have been doing. These brothers have moved the concept of hood media to another level. By setting up an academy that arms young people with media and the skills to control their images, they have empowered a generation of thinkers that will definitely have a say in the direction are communities go in. I only hope other youth groups embrace the model and begin to use media to build the images that they want to see rather than be victims to the images that are being produced for them and the world to see. Media is the new front lines and I salute 1Hood for building our Special Forces. checkout the video: Watch "Game Changers: The One Hood Media Academy" on YouTube Nuff said Peace & 1hunidyears
Post a Comment
Read more
More posts