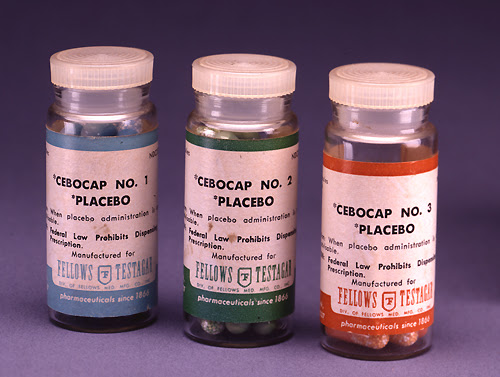 Image via Wikipedia
Placebo can heal/
Power comes from the symbol/
Now science proves it/
Ha2ku by ha2tim
Link:
http://articles.latimes.com/2010/dec/22/health/la-he-placebo-effect-20101223
Check out this article that discusses a study that shows that a placebo works even if the patient knows that he is being given a placebo. This speaks volumes about the power of relationship as well as the power of ritual and symbols. I know they dont mention ritual or symbol in the article, but lets take a closer look.
Going to a doctor can be considered a ritual. Although modern practice sterilizes the process the true essence of a visit to the doctor is equivalent to an ancient ancestor visiting the village shaman. We have supposedly cleaned up but in essence it is the same. Now the intersting thing mentioned is that the doctor developes a relationship with the patient based on truth. The doctor is honest with the patient about what is going on. The doctor informs the patient that they are taking a placebo, and the doctor tells patient , that they think (believe) that it will help. When we look at the rituals their is a relationship formed between the ritual leader and the participants based on the same principles. When a relationship like this is formed this gives the particpant (patient) an opportunity to play a major role in their healing rather than just being an objective observer depending on external factors. This allow the patient's mind body and spirit to get involved with the treatment (or what the ancient called the ritual).
Now lets look at the use of symbols. The placebo acts as a symbol of healing. Although the patient knows that it is just a sugar pill the power of healing may be released internal by the ritual of taking the pill twice a day. The important thing for those on the journey to realize is that 59% of the patients  were healed by their involvement with this experiment. What does this mean for you and your life, health and prosperity. If you need some help unleashing this power in your life stay tuned. I will help you.
Peace &  1hunidyears
Brother Ha2tim
SelfMasteryCoach
Nation Builder
HipHop Philosopha & Shaman
check me out @
Gyenyamejourney.blogspot.com

Email ThisBlogThis!Share to TwitterShare to FacebookShare to Pinterest
Labels: self mastery