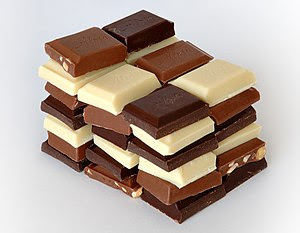 Image via Wikipedia
I will be sharing some material from my future books. I wrote this poem story in the late 80's, enjoy. This will be in my book called "the lost art of story tellin". I will post the rest according to the response. If you want the rest let me know. leave a comment here or on fb, twitter, buzz, snailmail, email, txt....
By the way check out my book (Player's Pyramid)and support the Journey. It will be availible in a paperback by the end of the month.

CHOCOLATES
No one likes chocolate
But everyone seems to like vanilla and alpine white
The darker the Chocolate the longer it sits around and no one will take a bite
Chocolate doesn’t even like chocolate or it’s darker cousin fudge
For anyone to buy either one they would need a little nude
It’s a shame when a chocolate company spends more money on vanilla, than on its own
And try to lighten up chocolate to be as white as a bone
Now the  vanilla company has put german chocolate and white chocolate on the market
Now its even harder for a piece of chocolate just to be chocolate
Now to me being chocolate is the only world I would be in, but the only way I would be bought if my name was first European
Or if in some way I try to fade to alpine, but there is no way I change, without first destroying my mind
Now I love carmel, and when I start to eat vanilla I find it hard to stop, but nothing taste as good to me as one of those fine proud chocolate drops
Or fudge is even better when its made the right way, either one will give me enough energy to make it through the day
The worst part about the situation is when chocolate starts to dislike itself, then it gets all hot and sticky, and begins to melt
Now there is nothing in this world…..
Nothing in this world worst than a melted piece of chocolate, even if I bought a melted piece of chocolate in the trash can I would drop it
Because a melted piece of chocolate would do nothing but contaminate the others, and cause strife and turn one piece of chocolate against another