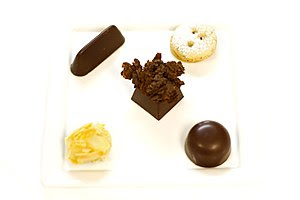 Image via Wikipedia
Thank you for reading and responding. This story poem will be in my book called "the lost art of story tellin". I will post the rest according to the response. If you want the rest let me know. leave a comment here or on fb, twitter, buzz, snailmail, email, txt....
By the way check out my book (Player's Pyramid)and support the Journey. It will be availible in a paperback by the end of the month.

Plus vanilla and alpine white definately wasn’t a joke, they put magic rocks in the chocolates neighborhood that would get chocolate high when smoked
Thw magic rocks could easily be turned to quick cash and this made it very profitable for some chocolates to stay off the path
Vanilla also developed laws that chocolate  had to follow just to make sure if chocolate won it’s struggle it’s soul would definitely be hollow
Now alpine white white was smart and king of the tricksters it tried to deny chocolates research by forming history to fit his picture
Vanilla cane up up with terms that would fill choclate with self hate like nigger, porchmonkey, negro, muleon and spade
Now with all this chocolate didn’t get to upset, chocolate figured as long as it could write and speak they hadn’t been defeated yet
Chocolate also realized that time was on it’s side , because if you mix chocolate and vanilla or chocolate and alpine white you get a chocolate kind
Now this fact vanilla and alpine had for a long timed feared the simple thought of a chocolate planet brought them to tears
Now a plan of action they had to make up, they had to find a way to destroy chocolates especially the ones with the nuts
So vanilla scientist came up with something that could make chocolate melt, and spread through the out the chocolate community slowly, quietly, and with stealth
Now chocolate didn’t expect anything quite like this, they knew they had to do something and something quick
Now chocolate not only had to deal with magic rocks, but this contamination that caused them to melt to, this contaminant wasn’t choosy it melted chocolates old or in their youth
On top of all this the magic rocks caused a chocolate war and it was killing chocolates especially with nuts by the score
Now the question I often ask myself is will chocolate make it through, but since this is a true continuing saga, I will leave the answer up to you.
TO BE CONTINUED…..