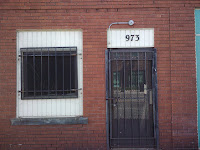 
It has been three days since I have spoken to Simba, and at this point I am on pins and needles. What’s
taking him or them so long to determine whether they are going to let me participate in the rites. For the first time in years I actually said a prayer. This is something that I really want or actually need to do. It is as if something within my soul awakened when he asked me to participate in this group.
I have put a lot of thought into what he said about the appropriate amount to present to the council as my sacrifice. I think that the info that Simba has already shared with me is priceless so I figured to give at least the same amount that I would have spent on some jewelry or some rims for a new car, if I was that type. I decided that five stacks would be a big enough sacrifice for right now, especially with no money coming in.
I must have dozed off because the ringing of the phone shocked me.
“Hello.”
“Yes, I am looking for a Jason Gadeon.”
This was a voice I never heard before, and he is saying my whole name, spooked me out but I decided to throw caution to the wind.
“What’s up?”
“Is this Jason Gadeon?”
“I said what’s up?”
“Well I’m calling for Baba Simba.”
“Baba Simba?”
I have had many conversations with Simba and he never referred to himself as Baba.
“You do know the Baba?”
“Yeah.”
“Well I have instructions to call you and tell you to report tomorrow morning at 6 a.m. to 1487 Main Street. Have your sacrifice in a white envelope and be ready to work.”
And as suddenly as the call started, it ended. All I heard was a click. I wrote down the instructions and went back to sleep.
I rose at 4:30 excited about what the future may bring. I have all kinds of questions to ask about the rites, but I will flow with what ever comes. I don’t plan to give this amount of money and just walk away.
When I arrived at 1487 I saw a nice looking building with a sign out front saying GyeNyame Nation Builder’s Club. I have passed this place a million times and never noticed it. The building looks like a store front with a warehouse in the back. I can’t help but to wonder what goes on here. I walk to the door and knock at 6 a.m. on the nose. When the door opens, I immediately smell a beautiful flowery incense. It is so strong I almost choke. A dark skinned brother greets me at the door.
“Who are you?”
“I’m Jason Gadeon.”
“Do you have a sacrifice?”
“Yes.”
“Give it to me. Come on in, we have been waiting for you.”
When I entered, the brother locked the door behind me. It looks like a bookstore, but I see no cash register around.
“Follow me.”
He walks me into a room that is full of bookshelves and couches. There are three other men in the room. All of them are looking nervous.
“Sit over there with them.”
I move even though I am feeling uncomfortable because the man’s tone is very aggresive.
“I’d like to take the time to welcome all of you to the lounge area of the Columbus chapter of the Gye Nyame Nation Builder’s Club. If you have made it in here you have been accepted as initiates into our sacred family. We have a very long and powerful history which as an initiate you will learn in detail. If you are willing and able to continue on this path, a whole new world will open up for you.”
He went silent for a second allowing his words to sink into our brains.
“My name is Brother Malik. I have advanced to the level of Supreme in this family so I will be your guide through your rites. Everything that you need to know I will teach you. The only thing I ask for is your trust and obedience. All of you will first be given a new name as an initiate. I have looked over all of your information that your sponsor gave to me. I will use this info to give out your names. When I point at you step forward to receive your name.”
Simba never mentioned that I would have to change my name. Hell, I like my name. Now if they change my name what else will they change. From the looks of things, I will receive my name last. He called the first guy- Kwesi. He took the time to spell it out for him and I suspect us as well, so that we could pronounce it correctly. Second man’s name was Kwa, third kwodo,and mine was Kwabena. I wanted to know where these names originated and why we were using them.
“These are the names that you will be called when you are here or handling family business. Get use to it.”
Get use to it!  I don’t even know what a Kwabena is. How am I supposed to get use to it?
“At this time all of you will go before the Elders one at a time for your final interview. At that time you will receive the opportunity to continue moving forward or you can quit and go on with your life. So I will blindfold all of you and yall will spend the next few hours blindfolded as we finish the interviews. Good luck!”

He put us in a line and placed the blindfold over my face, and it seemed as if I stood waiting for hours. My legs began to burn, and my feet began to hurt. Time was inching along it seemed, but my time finally came.
I felt someone tug my arm and I followed them. Then they suddenly stopped.
“Welcome Kwabena, you have been selected to become a member of our illustrious family. Are you willing and able to make it.”
“Yes.”
“Who is your sponsor?”
This was another strange voice, but I could tell it was a old man.
“Sponsor?”
“Yes, who recruited you and has taken responsibility for you?”
“I guess Simba.”
“Simba!!!”
I heard a woman’s voice amongst the shocked voices.
“You mean Baba Simba!!!”
“Excuse me, yes I mean Baba Simba.”
Another voice I never heard came through the air.
“How did you meet the Simba?”
“At the coffee shop that he owns.”
“How long have you known him?”
“At least six months.”
“Six months?!!”
I hear whispering in the background. Well I guess it would be safe to assume that this is the Council of Elders that Simba told me about. But I did not know or even guess that Simba was this important.
“Young man, we wish you luck on your journey. Realize we will not make it easy for you. As a matter of fact since Simba is your sponsor, it may be harder for you. Do you understand?”
“No.”
“But you will. Peace unto you.”
Someone grabbed my arm and led me out. We kept the blindfolds on for a few more minutes, then they were removed. Standing before us was Malik and three other brothers.
“All of you have met the council, now it is time for our journey to begin. Those of you that are willing to carry on return here packed up. You will be working and living from the club until you complete your initiation. Here is a list of what you will need. Everything else will be provided.”
Kwesi was the first to raise his hand.
“Yes Kwesi.”
“Big Bra, what do we do about our current living situation? We can’t just leave our apartments and jobs.”
Everyone agreed with him by shaking their heads. Malik looked a little agitated by the question.
“Kwesi, and the rest of you initiates listen to me closely.”
He paused as if he was waiting to have our total attention.
“No one is being forced to do anything. If you think that we are asking for too much, do not come back. As a matter of fact during the process feel free to leave when you want to because Gye-Nyame holds no prisoners. We are building warriors, nation builders, and elders. We are not only building them, we also support them. From what I saw when I was looking at your info, most of you live in property that is indirectly owed by our club or is heavily influenced by some of our members so in other words your leases won’t be a problem for us. Those of you that are working are doing things to survive rather than living and doing something you enjoy. The club offers you that, but it is your choice.”
Damn, Simba never let me know that they owned that much property and they could also provide us with jobs. I have to see where this takes me.
“For those of you who wish to return, you have 3 hours to report back here.”
He gave us the list which consisted of three black khaki suits, a pair of boots, pair of sneakers, a pair of shorts, and underwear. Everything else we needed to let go until we finished the process.
I did not care, I was returning. I wasn’t that attached to anything anyway. I really wanted to see how
deep this club could take me. The only thing I needed to save was my money and the rest I could let go. I was back at the spot in a hour and a half. Malik was surprised that I was back that soon.
“I expected you to return, but I was not expecting you this soon.”
“Big Bra I need something like this. In the streets if I had to do some dirt in another city I would have no problem leaving right away. I figured that this was a  important situation and I want to take it as far as I can, and get out of it as much as I can.”
“Well  Kwabena,  I want you to understand that once this process starts you may feel different.”
After that statement he looked at me and I felt uneasy, but I figured whatever came my way I would be able to handle it. For some reason I felt that I was born for this.
Two and a half hours had passed and everyone returned. It wasn’t surprising. We were basically handed a golden opportunity. There was nothing out there for us except them fuckin streets or somebodies slave job, and I had no plans on going back to either one.
I looked around at each person and I knew that each one felt something similar. It was scary as hell waiting for who knows what, but it was worth the risk. Malik got up looking official and threw us “one of those smiles.” You know the kind that someone gives you when they got you where they want you. He looked at us and then and his warriors and said “Welcome to the Underworld.”
Posted by ha2tim at 4/13/2011 06:13:00 AM