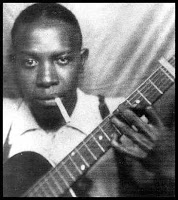 
This the centinial for Robert Johnson a blues man that became legendary after he died. Im am sharing this information because on the Journey we are tasked to find examples of mastery. If you take a little time to listen to him you will understand what I mean. This man sparked a whole generation of blues men and inpired another generation of rock and rollers with his style of strumming the guitar, lyrics, and most importantly his story. Robert Johnson died young and the legend of his life still lives to this day.
It was said that he recieved his gift of nusic from the crossroads where he sold his soul to the devil. His music echoes this theme with songs like "hell hounds on my tail, crossroads blues, and etc.. His music was full of imges that can be taken as occult, and mystic. Now for those that study history and myth understand the signifcance of the crossroads, and we also know that it was not the devil that hung in this places symbolic of choices in life. Robert Johnson was a Black man from the south who heard stories that we can directly trace back to Africa. Part of the slavery and colonization process was to destroy peoples myths, and demonize anything having to do with these myths. Western world had no room for trickster dieties so they placed the keeper of the crossroads (Elegba) in the devil category.
Im not hear to brake down what really happened to Robert Johnson but I had to slide that in. The major lesson for those on the Journey to take from his story is the power of legend. This man is alive and remember because a story the rose up around him and apparently he grasped that legend and ran with it and many ways achieve immortality. Check out this recording and look up some more info on him