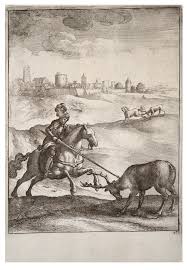 This is a tale of enslavement, and as sad as it is I have to make sure that my readers get the point. Please realize that this horse was a slave long before he took the man as his partner. The horse fell prey to the Unbalanced passions that we often talk about in Gye-nyame long before the bit was placed in his mouth. He led himself toward destruction and sacrificed everything because he was not seeing clearly.

The most unfortunate thing about this whole story is that I witness this behavior on a daily basis. We have people willing to slow dance with destruction rather than take a moment to really think about the ramifications of their actions. I have seen people destroy and attempt to destroy organizations that serve the community for something as petty as the horse’s grievance in this tale. Just like the horse, these people don’t realize until it is too late that they have sold their souls.

Man it is like watching a car crash in slow motion. You know the result you even try to warn the person that they are not seeing nor doing what they think, but they move with force and the next thing you know they are sitting with a bit in their mouth serving time, or someone else.

“At one time the Horse had the plain entirely to himself. Then a Stag intruded into his domain and shared his pasture. The Horse, desiring to revenge himself on the stranger, asked a man if he were willing to help him in punishing the Stag. The man replied that if the Horse would receive a bit in his mouth and agree to carry him, he would contrive effective weapons against the Stag. The Horse consented and allowed the man to mount him. From that hour he found that instead of obtaining revenge on the Stag, he had enslaved himself to the service of man.”

If you don’t get anything from any of the other folktales please spend some time with this one. Especially my people, and my tribe make sure you allow this folktale to spend some time and make its way into your heart. This one may save two lives.

Listen to "FFGF- The Horse & The Stag" on Spreaker.
aesop determination mastery self selfhelp