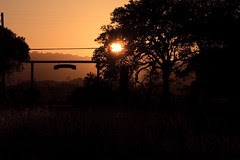 Image by lassi.kurkijarvi via Flickr
Exposed to nature
No Food or water I prayed,
words had no meaning.

I will be reflecting on Hamblacha 2010 and the lessons that came to me for a few blogs so bear with me. I exposed myself totally to nature, and faced what one of my elders described as the "lonely miles". The concept of the "lonely miles" was taught to me by an elder who use to be a race car driver. He stated that in the middle of a long race he would reach a point where he would start to wonder about why he chose to race. He stated that he had to battle and push through this time. He told me that this is where your mind starts playing tricks on you and if you are not totally commited to what you are doing you will quit. Because what you are doing makes no rational sense. As a race car driver he stated that he would be faced with the fact that here he is in the middle of a 500 mile race, a full grown man with responsibilities, risking his life by hurtling himself in a piece of metal at riduclous amounts of speed around a track, but his committment to his goal and his passion would pull him through. The same thoughts began to surface for me as I was sitting out on the "hill" as they say. I was challenged by my intellect to make sense of what I was doing, and I could not.
Often times in the journey to SelfMastery we are called to do things that may not make rational sense to yourself nor the rest of the world, but we push through because of the passion and commitment that we have to ourselves and our goals. We understand that many of the answers that we are seeking cant be found in this world or at least in the world we are presently in, so we strive to expose ourselves to something new, challenging and different. I can remember that I use to face the "lonely mile" in the middle of a football game. I would be exhausted in the 4th quater wondering what the hell I was doing, and then the ball would move and total clarity would arise again and I would do my part to push my team to victory. So with that I found myself sitting exposed to nature in 2010, hungry and thirsty praying till I could muster no words because my throat was dry. To tired to stand up because of my fast, so I began to visualize my prayers and the people that I was praying for. Exposed out in the wilderness I was able to learn how to really pray. exposed in the woods I learned the meaning of humbleness, exposed in the woods I learned about about or was reminded about a power in me that is greater than any in the world. The fact of the, matter was the only way that I was able to learn and/or remember these things was because I was willing to expose myself to my own riddicule and face the lonely miles and by doing that I found out that I am never alone.