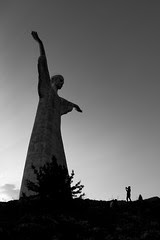 Image by Aesum via Flickr
David slew giant/
With free stones, could terrorist/
Do same to this land?/
David slew the unstoppable Goliath with three smooth stones. David was a unknown shepard living in the hills with his flock, he had no reputation nor did he have anything to loose. The stones costed David close to nothing. The only thing we can factor in for David's expense was the fact he had to spend time finding the stones. Goliath on the other hand was known as unbeatable and he spent years building up this rep. He also spent thousands of his country's money to arm and protect himself.
We all know the outcome of this underdog story, but have we explored it as a metaphore for what is happening between America and this war on terror? America the once under dog country now has grown into a Goliath. It's exploits are lengedary. Like Goliath America has spent large sums of money on it's weapons and it's protection. America is now poised on the battlefield ready to face down their opponent in a one to one old style battle. This is an old paradigm of war.
On the other hand we have the small opponent, that is on the battlefield with stones to sling at this superior opponent. The goal of the terrorist groups is to wear the giant down by agitation before the final killer blow is thrown.
I know that I am simplifying this conflict, but I can't help myself. I'm looking at what is going on and can't help but laugh. I dont want to offend none of the readers but it seems that the little David's strategy is working. Has anyone else noticed that everytime a terrorist organization strikes at America they only use stones. What I mean is that they use minimal resources. The last attack, I heard costed the terrorist (what ever name they are rolling under) $4000 and a few months training. America's response as usual is costing the American people millions of dollars to respond. Last christmas the terrorist groups sent a boy on a plane with a pair of bomb drawls, and now America is responding with more millions. The most dangerous part of this strategy is clear to me, but I guess the egg heads in washington can't see it. America is not only bleeding money fighting an idea (terrorism) but they are now losing the faith of the people. The small David has used fear to bring Goliath to his knees.
Now bringing it back to us, what small fear do you have in your life that is bringing the greatness that is YOU to  your knees. What fear has paralyzed you with small strikes. The best way to deal with this is to be honest with yourself. After this you will have to face this fear, and look at it for what it really is. Most of the time you will see something small and simple to deal with. After this then you need to win back your own heart and mind through loving yourself, and making your goal more important than the fear you feel. Fear has a way of screaming so loud that we make it a priority when in fact it is not. With time and implementing our plan it will fade away. You see when you win your heart and mind you can focus them on your objective. Fear attacks the heart and mind. When you assault fears stronghold it can do nothing but sit silently. It may never go away but with no audience it has no power.
If only our country's leaders could apply some wisdom rather than using egg heads who are working off of theories. If America wants to win this war they have to shoot for the hearts and minds of the people. They have to destroy the stronghold of the terrorist. Take away what they say they are fighting for and leave them without a reason to fight. Get into the minds of the elders and the youth. This is not hard we have the tools sitting in America to do this. The terrorist need to be made to turn on themselves by taking their audience. We need to stop using our old paradigms in our personal lives as well as our national lives. We need to do Small strikes as well. For example build schools, and hospitals. Of course the terrorist will destroy them, but who will be seen as the bad guy in that scenario.


For your journey you must master the skill of the small strike as well. By doing small strikes at your fear you knock it down to size. Each time you take a small step toward your goal you liberate a small piece of your Self. Remember that a bucket is "filled one drop at a time". Small strikes done consistently enough build up a momentum that even the strongest fear can not stop. Build up your momentum to begin your Journey toward SelfMastery. Do Like a America will have to do against their foes to be victorious, because America's foes are surely doing it to  them.
Onehunidyears
Brother Ha2tim
SelfMasteryCoach
Nation Builder
HipHop Philosopha & Shaman