"Freedom has never been gained or lost in one sweeping  coup d'etat, but more in small stark steps that culminate in either the victory or defeat of  the people." 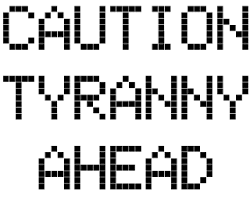 Freedom is a heavy burden to bare, and it requires those who operate under it, to observe the world so that  they will not lose it. Freedom is a double edge sword that cuts both ways and sometimes will cut those wielding her if they are not paying attention. Look at what is going on America and understand that we are suffering from cuts from the sword of freedom. Just because you cut yourself with a tool (a sword like freedom is a tool that is used by people) does not mean you put it away. You either find a better tool for the job, or you improve your method of wielding it. Both of these option requires the user to do work either on the improvement of the tool, or to practice working with it (tool). We can not and should not give away our freedoms because we have been cut by them. We have to be willing to take the bitter with the sweet. the same freedoms that allowed for the mass murders, and the Boston bombing are the same freedoms that allow us to speak our minds without fear of retribution, or create life saving businesses. I know this will be hard for many of you to stomach, but the violation that I see creeping up on us will eventually take everything from us.
"But Brother ha2tim, guns are an evil that our society no longer needs, we have to look out for the safety of our babies", I can hear some of you now saying. Although I personally do not like guns I like having the ability to get one legally when I want it, and I also like having the freedom of privacy when I purchase it as well. I realized years ago that a gun (which is nothing but a tool) was not and is not responsible for the violence that has been around me for years. I am a gunshot victim and I know that it was not the gun that shot me, it was the malicious intent of the individual that owned the gun. Also If our society has outgrown the need for the citizens to carry guns, then let's also have the police, and the military lay down theirs as well.
For me something bigger than gun control is brewing, because at the same time behind "closed doors of our transparent government" (this is an oxymoron) bills like CISPA are being created, debates about the use of drones in America being waged, and etc..  I have to ask the question what  is the government (federal, state, and local) seeking. Do they want us to be safe within the freedoms we have been guaranteed by the Creator and the Constitution, or do they simply want to control the people which is just another form of tyranny.
Here is a reminder for those who may not have time to read the documents that lay the foundation for the Government that is supposed to represent us: