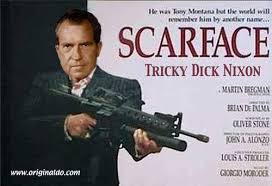 My elders told me this in the early 90's. It has become a fact because one of the parties involved spoke up, but the evidence has always been there. Now the issue that bothers me is that America treats Black folks as if we have had every chance to make a better life for ourselves. The War On Drugs (WOD) started in 1970, taking up from  where Jim Crow left off, which had took up from where slavery left off. The fact is that Black Folks have been under attack since we have set foot on this land.

Many of the complaints that I hear coming from the other members of the U.S., and even from other Black folks seems to leave these factors out when we they diagnose our ailments. The fact is that we have been used and left behind in the world wide race. We may need to now step back and look at some new ways to win, because trying to catch up in the traditional fashion is not going to work.

Those that know me you best believe that Mr. Richard (tha dick) nixon is going to get the siren of fuckery Friday night on my live show. I encourage you to call in and let's chop it up...

'via Blog this'
commentary freestylefriday fuckery gyenyamejourney war on drugs