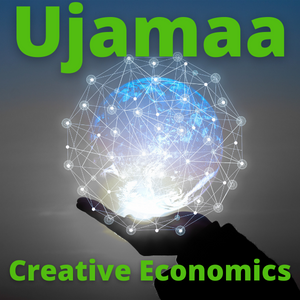 Let's start this conversation by using some of our crystalized wisdom that has made it to us from our Ancestors, we will be using the idea of Sankofa. Sankofa for those who are new to this journey is the Akan symbol with a long necked bird stretching its head back to grab an egg off of its back. This is defined as going back and fetching it. It for us is cultural wisdom, and I want to reach back and remind you that wealth for us traditionally was in the people, and believe it or not it still is! Nothing of value is found, created, shaped, molded or whatever can be done to it without the touch of a human being, or groups of human beings.

“Wealth exists in the people and we need to reclaim that value,  to help us build pathways for real wealth.”

The smart phone you are reading this article was made and created through a process hundreds of individuals through their combined effort was able to put together. The components that were put together for that device were worked on and theorized upon by hundreds if not thousands of people. Lastly, the programs that allow the device to come to life and be useful to you rather than being a hunk of plastic and rock was touched and created from the mind of people. The common denominator in this whole idea is that the usefulness of the machine that you use was created by humans, and they were able through their labor to put value into it. Everything needed the input o a human being. In this culture we have been made to believe that we are worthless so we carry ourselves as low value and expect low value for what we do. It is important that you get this in your mind. You create value, you are the value behind things. Your skill, work and labor mean something even if you don’t recognize it, and that is the job that we have taken up here at GNJMedia.

We want you to see your value through the lies that have been told to you. Last point then we will get to the Ujamaa (we really are talking Ujamaa right now) and the Kuumba portion. Western society, the way it is structured, needs an underclass that everyone can step up on to get elevated. This comes in the form of cheap labor and slavery. Please don’t be fooled because you have a $1300 phone in your hand. Someone is using your people, your community, your family, and your tribe as a stepping stone to wealth as we speak right now.

“We want you to see your value through the lies that have been told to you. Be honest with yourself and your community will elevate with you in the truest sense of the word.”

You are probably thinking well Brother ha2tim what can we do about this. We can get creative with our resources, first we have to recognize that we are the root of our wealth, we bring things to life, and we can, should, and will with your help begin to to blow up our old paradigms. First step is to once again realize where we are as first an individual, then as a family, and as a tribe. We have to take an inventory of the skills, personal resources, group resources, and the amount of fiat we bring in. Then after we have started this process we can begin our work.

“In a time when there are few options, we can get creative and be our own resources.”

One of the first things we have to attack I believe is our expectations. I used to wonder why many of my friends when I was coming up were excellent athletes. Then one day I heard an interview with a pool hustler by the name of Jimmy the Greek. He stated that Black folks were good at sports because we were bred to have endurance, and to be strong. Although that was not the first time I heard that conversation, because many adults around me were saying that or believing that. As I got older and began watching the young folks around me my mind began to shift. The thought hit me that we produced many great athletes (pro and none pro, remember the playground legends) not because of the breeding, but because I believe the power of our expectation. We expected our young people to excel, we believed that they would excel, and we pushed those that showed a little aptitude for the sport.

“My generation must find a new way for our young people to excel and succeed.”

I think we misunderstand the power of our influence on our children. What if we were to have the same expectations just on the tribe level for our children to not just excel at sports, but to excel at math and reading. I believe that this would change the culture in a generation. If we expected our children to excel at everything, and not just silently wishing but programed them with the stories of others in our bloodline or close relatives that did achieve.  I believe that they would begin to live these myths. The only issue would be that this has to be community wide. This means that many of us would have to frequent the hallways and byways of our youth making sure that the teachers adhere to the stories that we are telling, and we have to set up programs that would push them as well.

“We can change the landscape of education.”

Believe it or not this would require us to unleash our Kuumba on the young, to keep them hyped up while we have to send them into enemy territory to learn. I know this can work because we have the evidence sitting before us. Now I just want everyone to think about the progress we have made so far on these American shores. The very generation that made it possible for you to use the restroom, and eat, and buy what you want from where you want, were mostly educated in their young years in all Black schools ( here is some more Sankofa for you). Those students were not only willing to put their lives on the line, but they were willing to put their minds on display, and wowed the whole world.

“We can learn so much from the education our ancestors implemented. I believe this is the key to success.”

Now I need you to dig into your imagination (kuumba) and ask yourself the question what would have happened to America if Black schools were maintained and received updated equipment for learning. What would happen to the masses of those that built up the country? Now I want you to think creatively and think about how you would smash such power. Back in those days there were expectations put on Black children from Black teachers, and Black communities, and somewhere somehow this whole idea got flipped on its  head!!! Now we are a consumer class that owns next to nothing. This is not by accident.

“What would have happened if Black schools were maintained?”

Now we have a responsibility to begin pulling our resources together, educating ourselves, and building institutions that can support us moving to the next level as both individuals and as a group. We need to begin to create products that bring value to us, that we will only buy from each other (staples). We need to begin to develop and fund tribes that not only lift up our culture but feed us spiritually. Lastly we need to begin to chase out those that violate our borders and rules regardless of their color. All this simply starts with us putting our Ujamaa and Kuumba to work. Now many of you say brother ha2tim this is impossible, we tried that and they get angry and burn it down or try to take it over. I agree but that does not mean that we stop. A prime example of our Kuumba creating a powerful resource that we need to begin snatching back is HIP-HOP. This came from us and through us and now we have allowed others to take advantage of it. We don’t have to do this any longer. We no longer need middle men to get our stuff out and we can begin snatching it back and build the protective mechanism to protect it. This is nothing but a little of our collective Kuumba coming up with an idea and we begin to implement.

“If you follow, believe and participate we can start to use the power that our culture gives us to Hold It Down.”

Now let me be clear I am not jumping to a solution that requires everyone. I am jumping to an idea that small tribes all over this country can begin to do within their groups. If we begin to create and trade goods between them it would take us a long way. I know that we have plenty of businesses and entrepreneurs, but I am simply suggesting that we start using our creativity to develop businesses to support our community and produce products and ideas that our people need. Many of the businesses that may be failing are failing because there is no need for them. I mean a real need, like you need electricity to power your phone type of need. I see many entrepreneurs in our community going for the flashy, rather than grasping at the necessities of life. The latter is not sexy enough for us, the money is too slow.

“Let's not just get it working for the businesses and industries outside of us, let's turn those ideas inward and begin to serve our own community.”

I am going to stop here and save some for tomorrow, where we are going to look at developing an immune system in our community that will expel any agents out of our tribes for making the collective sick. The idea is simply if we look at our families, tribes, villages, and our communities like bodies then what do we have to do as the immune system. I believe Nia has a lot to do with this.