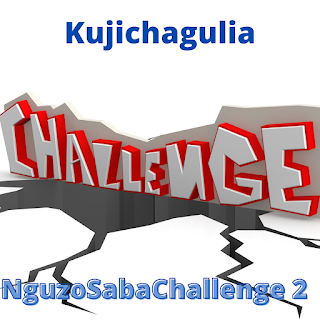 We are continuing the discussion today, so to get a better understanding please go back and read part 1

From there we got into the #NguzoSabaChallenge, this came about because I read somewhere that it takes 21 days for you to develop a habit (scientifically it is not true, but it sounds good). I wanted to present folks with a simple system that they could walk themselves through and make the personal changes that they needed in their lives. Plus I wanted to help them establish a connection with their culture. Through my personal use of the Nguzo Saba  I had experienced some of the same success that many people experienced using different systems, but this one allowed me to explore my own culture, and become the best Black man I could be. Not just plug into a system that moved toward the “universal man'' concept that is at its heart attempting to make you into the best servant of west asian capitalist you could be. So the #21DayNguzoSabaChallenge was born. I did my first challenge as a fast, and I completed it but I learned some important things about fasting the first two years, and now I adhere to them during my long fast now. I also learned many things about myself. I don’t want people thinking that the 21 day process is only for fasting, it can be used to help you establish or break any habit that you want.

“The Nguzo Saba Challenge is the revolutionary approach to positive growth that allows you to finally make the personal changes that you need in your life.”

After working with the #21DayNguzoSabaChallenge I began to wonder if there was anything else that I could do or add to the system. I had people around me that could get the basic system but they needed more to build upon. So from there I created The 7 Day free ecourse, that introduced people to the overall system. This required me to collect all of my videos, books, podcasts and decide which to put into one place and begin to create 7 short videos that could get the idea about everything that we were doing, and how people could start applying all of the information to their lives and businesses. I knew that I had a system that people could use to build the type of life that they wanted but the question was how to give it to them without overwhelming them. On top of that I was doing videos 7 days a week, and my audience was getting ding fatigue. At this point I was challenged with bringing Kujichagulia through Umoja. How could I unify the system and give people the basics of the system so that they could start adding it to their lives.

“Have you ever wanted to stop doing things because it was just too complicated? The Nguzo Saba can help you create your own approach to life that suits your personality and lifestyle.”

At first I came up with a 21 week challenge but that would have been too long for the average person, and it would also be super heavy lifting on my part. Because this type of course would require constant meetings about the process, and constant encouragement from myself. Had to take time and define what I wanted to bring to the public, and define a goal that was reachable for all those that got on board. At this point in my life I was deeply into the system, getting results in other parts of my life but the course was dragging along. The 7 Day free ecourse was making no headway, and people were not flocking to the doors. So I had to take time, and step back and look at what I was offering. I had to ask myself questions to help me identify the audience for what I was doing, and then once again evaluate launching a course that would take half a year to complete. My goal was to present the systems that worked for me, but I wanted people to develop enough confidence in themselves to adapt it to what they needed in their life. Plus for it not to be so time consuming for them that they would get frustrated and walk away. So I began to ask myself, as well as being faced by questions from my “MindSet group” as well. In me asking the questions a new Idea hit me after I was hit with Covid.

“I learned how to live a Life of Freedom by using these methods.”

I was struck down and for the first time in 6 years I missed doing the Daily Toast (This is a show where I Toast our personal Ancestors everyday), my daughter tried to do it but she gave up on day 2, of me lying in the bed sick. The response to my question hit me  while I was lying in bed. To take pressure off myself on a daily basis, I decide to do the Daily Toast Once a week, and send it out everyday at 5:45 am. Then with me doing this the next Idea that would redefine everything that I was doing came into my mind. If I was doing the show once a week, what color shirt should I wear? Everyone that has watched the show knows that on the Toast, I would wear the color of the day ( each day of the week not only has principles but they each have a color). At first I would wear a black or white Hoodie or shirt but that started to bother me. Then the idea hit, now I want you to realize that process was working in the background. I had gone through all my steps, and now I was waiting for a solution.

“Join the Nguzo Saba Revolution, and start changing your life today with a series of daily challenges using the power of African culture.”

The solution came back to me as a question. If you are doing the Toast by the week, why can't each week have a color or why can’t each week have a principle that goes with it. I sat on this for a while, and thought that it would not work because there are 52 weeks in the year so that meant that at least 3 weeks would have absolutely nothing assigned to them. It took me a couple of weeks to think about this, but the final solution was that those 3 weeks that we are talking about would fall in December, and during that time those who were using the calendar could use a break. Plus during that time of the year there are a whole lot of holidays.

“The 21 Day Nguzo Saba Challenge is a process that allows you to build, rebuild and establish your habits on the principles and values of Nguzo Saba.”

From there I began working out a model on paper and now we can say that we not only conquered the days of the week  we have also conquered the weeks of the year. The other issue that it solved was that i could do a 7 week #NguzoSabaChallenge rather than a 21 week challenge. This system simplified the whole process. Now I could focus on putting together something that was long enough to help people create the habits to build the life that they wanted, but not too long that it would chase them away. In seven weeks I could get enough information to connect them with their culture, and give them enough information to either join our tribe or build their own.

We will continue discussing this process on Ujima....