shouts out to the Midwest Spider

April 23, 2011
power is making/
your dreams breath and walk for real/
through life obstacles/

This a new part of the Journey I will begin sending shouts out to local artist, and entrepreneurs that are on the Journey. It is important that we support these folks, because they are out there grinding trying to get there name out there. So feel free to hit me up with suggestions for yourself as well of friends that out there "doin it". You have to have respect for those people that are out there making their dreams real. whether they are grinding out of their trunk, or selling their products at beauty salons or barber shops. When we support them we are really supporting ourselves. Each time we purchase a book, cd, ticket, or piece of heart we promote the culture of entrepreneurship. We keep the flame burning in them as well as ourselves.
although i hve put some artist on the Journey i have never really introduced them to you so I have one of my favorite Hip-Hop artist send me his Bio and a link so that you could check out his work. Who knows maybe I can motivate that one sale that will keep the artist focused. I have to admit this artist is a relative, and i am very proud of the work that he has done. To watch the growth in this young man is still inspiring to an old Simba (click simba to help support another group that I Love) like myself to keep going. So i am publically announcing to my young bras/sistars out there this is our year, and like my brother CJ of  "The League of young Voters", 'LET'S GET IT'......
Ladies and Gentleman I present to you The Midwest Spider.....
BIO 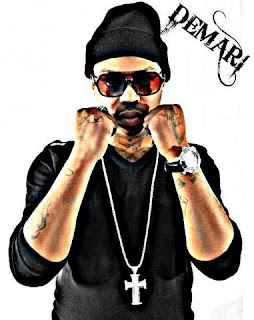 Demari Faust:  Hip Hop Artist/Song Writer from Columbus, Ohio
…an Artist with a style like no other.  Demari’s self-described style of Weird, Artistic, Story Telling, and Outside of the Box only partially describe this brother’s ability to mesmerize his audience.  “I would like to be a pioneer in bringing back the Art of Hip Hop.  I’m not trying to be a superstar so much as I’m trying to get people to think…I love Hip Hop.  The money is important but I love Hip Hop more.”
Born in Harlem, New York, Demari’s family moved to Columbus, Ohio at the age of five.  At less than ten years of age Demari was in love with the artistry of music.  "The first tapes I ever bought was Das EFX, and TLC's first album, I also bought NWA EFIL4ZAGGIN, EPMD….  I was just spending my lil allowance money".  From then on Demari’s love of Hip Hop music was deep.  “But I remember I liked Rock n Roll as well, I used to stay up and watch Headbangers Ball on MTV...".
Although Demari has created his own style of music his influences are many.  “Tupac got me through some of the toughest times in my life. Biggie and JayZ made me get fly and want that nice shit.   Nas and Common made me think deeper.”
Demari’s freshman performance at Club 161 in Columbus proved to be the major turning point in the development of his music career.  The crowd loved what they heard and saw that night.  So much so that Demari has become an integral part of the Hip Hop scene in Columbus.  Since that time Demari has performed at several night clubs, venues, concerts, festivals, and expos.  Demari has performed in Decatur, GA and Biloxi, MS as well.  Demari has opened for Ray J and Ginuwine and is currently set to open for Nappy Roots.
Demari’s freshman MixCD, Dinner and A Movie was released in 2010 and sold 4700 copies “out the trunk”!!  Dinner and A Movie II (full album) is slated for release in 2011 and is destined to do major numbers also.
“To me music is one of the most powerful forces in the world.  It can make you think a certain way, feel a certain way, it can make you cry, laugh, party your life away… you can really get lost in music.  I could go on forever.  Not only am I an Artist...IM A FAN!!"

Hear his music and keep up with what he is doing @ reverbnation.com/demarismovie