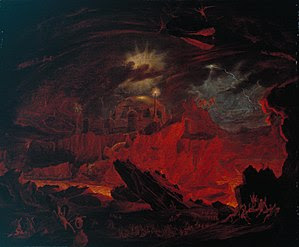 
After years of dedication to her tasked. the Elder received a visit from the Spirit realm. her Ancestors through the power of the Creator came to her while asleep. Her deceased grandmother took the lead role because she would recognize her. Our Elder was amazed at the Axe' of this being it flowed around her and through her grandmother. It Shined so bright that the Elder had to cover her eyes. The ancestor then announced to the Elder that she was there to answer her question and show her the key to righting things in the world again. the Ancestor embraced the elder and took her first to see what the ancestor called a community in hell.
When they arrived the place was in total disaray. trash littered the area, nothing appeared to be taking care of. The community of adults and children sat at a gigantic round table and you could hear the arguing, and disrespect taking place. Youth did not respect the elders and elders had no love for the youth. Each person sitting at the table either was banging there heads on the table or shouting at the people on either side of them. The delema was that everybody at the table was hungry. You could here the belly growling from a distance. The strange thing that was that the table was full of food. all types of dishes had been prepared but everyone was arguing about how hungry they were. The Elder could not understand, and turned to her grandmother ancestor to ask, but before she could say a word she pointed at the table again instructing the Elder without a word to look more closely. The elder paid closer attention this time and noticed that those that were trying to eat, could not put the food in their mouths and satisfy their hunger because they hd no elbows. so everythime they tried to put their food in their mouths it would fall off their spoons back onto the table. Of course this caused frustration and in turn they would bang their heads on the table or verbally attack the person next to them and this went on for hours. The Ancestor turned to the elder and says "this has been going on at this table for thousand of years." The elder listened respectfully but she did not want to see a hellish community she experienced the same hunger that the people at the table experienced everyday herself. She wanted to see a working healthy community. she wanted to see a heavenly community that had it together. As if the ancestor was reading her mind. She hosted the Elder up and before the Elder knew what happened they had flew what seemed like thousands of miles maybe hundreds of thousands of miles. they moved so fast everything was a blur. When the landed the Ancestor put our Elder down in what seemed like the same place. this place looked exactly like the last place they where in except this place was takin care of. No litter things were in plac and appeared taking care of, and in the center just like in the Hellish community there was a giant round table. instead of hearing arguing,   hungry bellies, and seeing fights breakout. we here joyful sounds, and laughter. This community or as the ancestor called it the Beloved community, They were in the same situation as the hellish community. They had no elbows, but instead of trying to fead themselves they fed each other.
The ancestor looked at her grand daughter (our Elder) and said "do you have your answer?", and the Elder said yes, and woke up and got to work.
Our Elder dedicated her time to servicing and building the community by living the example she had seen. She told the story to everyone that listened. at first people wrote her off as crazy, because she continuously gave of her time and resources. Rather than just feeding herself she fed others, she clothe others with close that she took the time to make. She showered her community with Love expecting nothing in return. As she continued she began to see the returns. First when she hit hard times someone would always pop up to help her. Then she noticed other people helping others with words like, good day, and have a good morning. then she began to notice random acts of kindness in her community. eventually s she stayed true to the vision that was given to her it become reality first on her block then in her neighborhood, and just kept expanding from their.